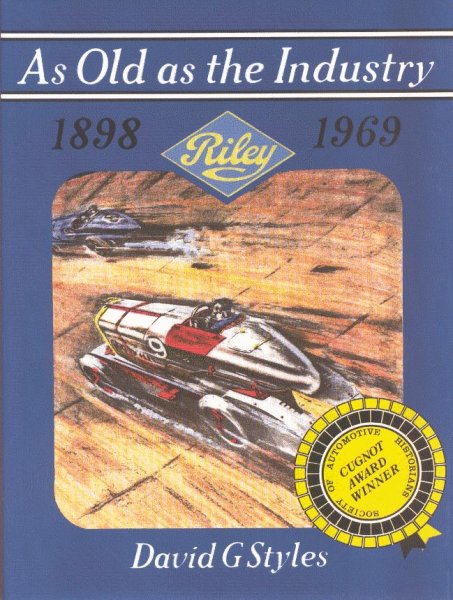 Beschreibung
Beschreibung
by David G. Styles When first published in 1982, this book was acclaimed by the motoring... mehr
Menü schließen
Riley 1898-1969 #2# As Old as the Industry

When first published in 1982, this book was acclaimed by the motoring press as: "... an exceedingly welcome and very worthwhile addition to Riley literature ..." (Motor Sport - 1982), "... an absolute must ..." (The Riley Register Bulletin - 1982), "Few volumes come to mind which have stood the test of time or are destined to do so. Riley enthusiasts need look no further than David Styles' complete history of the marque ..." (The Automobile - 1982), "All you ever wanted to know about Rileys ... well-researched and informative ... deserves to succeed" (Classic and Sports Car - 1982), "... this magnificent work was worth the wait. It will go down as one of the most outstanding volumes of automotive history of our time" (Bulb Horn -1983), "... intended as a reference for the Riley enthusiast and succeeds admirably in its purpose ..." (the VSCC Bulletin - 1983). In 1983, the book went on to win the most coveted of prizes from the internationally renowned Society of Automotive Historians, the Cugnot Award, for "the best book on automotive history published in 1982".

We are led through the complete history of Riley products, beginning with the bicycle and wheel-making businesses, followed by all the vehicle types on two, three and four wheels produced between 1898 and 1969. Two chapters cover the sporting Rileys and the Riley-based specials (though reference to the companion volume Sporting Rileys - The Forgotten Champions will reveal much more on that subject, whilst for those seeking more information on the migration of the Riley family to Coventry and the growth from weaving into wheeled vehicles would benefit from referring to Riley - Beyond the Blue Diamond). Appendices list over 4.000 known Rileys, detail Riley patents, Riley Clubs worldwide and notable competition successes.

Volume II then covers the cars built under the Nuffield and British Motor Corporation periods, culminating in the final episode under British Leyland, before that corporation drew a line under the name "Riley" and ceased production of cars under that badge.