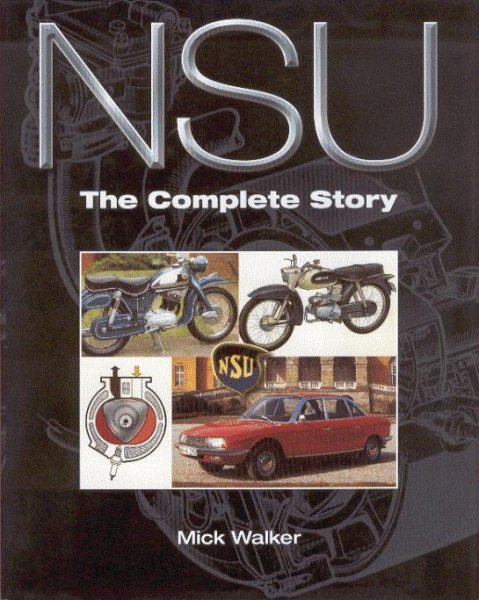 Beschreibung
Beschreibung
by Mick Walker NSU (Neckarsulmer Stricken Union) was not only one of the real pioneers of... mehr
Menü schließen
NSU #2# The Complete Story

NSU (Neckarsulmer Stricken Union) was not only one of the real pioneers of the German car, motorcycle and bicycle industries, but also enjoyed over a century of production, beginning in 1873 with knitting machines and, ending in 1977 when the final NSU car rolled off the Neckarsulm production line. In between, NSU was often at the very forefront of technical innovation in each of the motorized fields in which it took part.

The first NSU motorcycle made its debut in 1901, whilst the first car arrived four years later in 1905; the same year that the German marque established a sales office in London. NSU was also heavily involved in all forms of motorcycle and car sport, with their vehicles winning many international events and even world titles. During the Great Depression of the early 1930s, NSU quit cars, not making a return until the late 1950s, when first the Prinz series and later the Ro 80 were highly acclaimed.

In the two-wheel world NSU was, in the early 1950s, the biggest manufacturer in the world, with its Quickly moped line selling over 1.1 million units. The mid-1950s saw NSU motorcycles win several world road racing championships; in fact, Soichiro Honda was so impressed during a visit to Europe in 1954 that subsequent Honda machines were clearly based on technology pioneered by the German works.

During the 1960s the Prinz range were top-selling microcars, and the NSU Spyder was the world's first Wankel-engined car when it arrived in 1964. NSU sold patent right to other firms all around the globe from the late 1950s onwards, including the likes of Rolls-Royce, Mercedes Benz and General Motors. In fact, today's Mazda RX8 sports coupe uses a Wankel power unit!