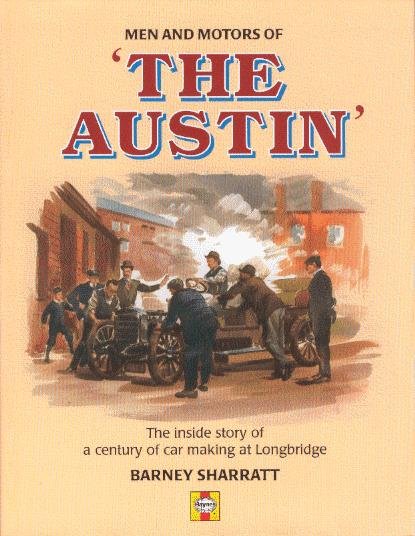 Beschreibung
Beschreibung
by Barney Sharratt Herbert Austin's Longbridge factory, known locally as "The Austin",... mehr
Menü schließen
Men and Motors of 'The Austin' #2# The inside Story of a Century of Car Making at Longbridge

Herbert Austin's Longbridge factory, known locally as "The Austin", has provided a livelihood for many thousands of families in the West Midlands for the best part of a century.

Here is the story of "The Austin" - both the cars and the factory - in the words of those intimately involved in the styling, design, testing and building of Austin motor cars since the works was established.

This intriguing story is not only rich in historical detail but also in human experience and social history. It portrays, for example, something of the blood, sweat and tears, era by era, that led to success or failure, joy and disappointments. In short, life as it was for men at "The Austin". Distilled from 20 years of interviewing Austin men, from the shop floor to managing director level, this unique book offers a multitude of fascinating and previously untold stories.

It details the technical development of the Longbridge-designed and produced cars, many of which have become household names, from the Austin Seven to the A30 and A35, the Mini, Maxi, 1100, Maestro, Montego and Metro. The changing ownership of the factory in post-war years is also fully covered, including the various mergers with former rivals, during which time it traded under various well-known names including BMC, British Leyland and Austin-Rover. The adoption of the Rover name for Longbridge cars in recent years is explained, with the story brought right up-to-date to include the acquisition by German car manufacturers BMW, and the background to its subsequent disposal despite assurances to the contrary as late as January 2000.

The Author is a life-long motoring enthusiast and a regular contributor to the classic car press. His writing is noted for its painstaking research, this being his most comprehensive work to date.