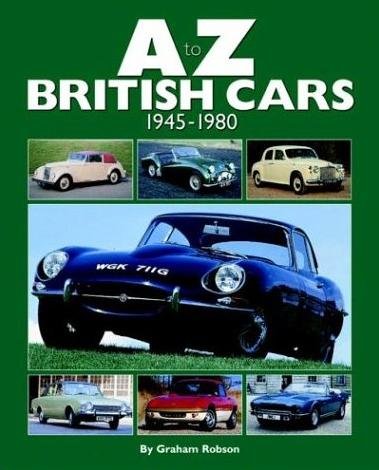 As Britain emerged from war in 1945, the pent-up demand for new cars, which had not been produced for more than five years, represented not only a major challenge but also an unrepeatable opportunity for the British motor industry. Yet by 1980, when the period covered by this book closes, many old-established marques had faded away and others were in the closing stages of a painful decline.

It was not all bad news. There were the outstandingly attractive sports cars of the 1950s and 1960s, including Austin-Healeys, Jaguars, MGs, Sunbeams and Triumphs, and stylish sports saloons like the Jaguar Mark II, the innovative Rover P6, the Triumph 2000 and the superb Jaguar XJ6. On a more bread-and-butter level were the immortal Morris Minor, the all-conquering Ford Cortina, and that groundbreaking "people's car", the Mini, on whose layout so many of today's most successful small cars are based. During the period there were many tiny makers too, like Berkeley or Clan, one-offs like the Russon, and successful specialist manufacturers like TVR or Bristol. Yet the other side of the story included sadly inadequate cars like the Morris Marina and the handsome but flawed Rover SD1 and Triumph Stag.

In this book Graham Robson, who has been writing about cars and automotive history since 1960, provides encyclopaedic information on all cars produced by British manufacturers between 1945 and 1980. After an introductory history of each maker there are detailed model-by-model descriptions and analyses, with specifications, performance data and notes on variants. Some 700 models are covered in almost 500 pages and more than a quarter of a million words. Accompanying the text are over 1.100 photographs from the archives showing the cars in their heyday, with a proportion of rare and historic competition shots, all helping to evoke the atmosphere of motoring in the period as well as to facilitate identification.

As a reliable and comprehensive source of reference, as a mine of information to dip into, or as an absorbing way of spending the odd hour in an armchair, this A-Z is the ideal companion for all who have an interest in - and hopefully an affection for - British cars.