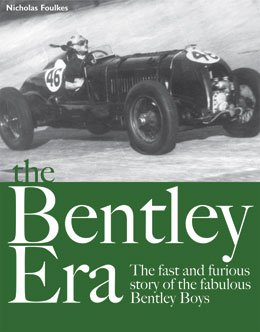 The Bentley Era tells the lively story of a particularly vibrant time within motorsport, a short period populated with devil-may-care characters famous for their high living and fast driving. For a few colourful years during the twenties and thirties the Bentley Boys carried all before them both on and off the racetrack. They, more than any other group of rich young men, embodied the carefree, spendthrift, thrill-seeking, sybaritic spirit of the Roaring Twenties: the time between the end of the First World War and the beginning of the Great Depression.

Speed, money, glamour, chivalry, patriotism, daring the Bentley marque would come to embody all these things. The Bentley Era is an evocative insight into the most interesting and eventful years during which the legend of the Bentley Boys was born, put into context within the history of Bentley by a rst chapter on the life and engineering ingenuity of W.O. Bentley, and an epilogue that charts the fates and fortunes of the Bentley Boys and the subsequent history of Bentley Motors. The Bentley Era paints a fascinating picture of the dashing Bentley Boys both on and off the motor racing circuits of Europe, capturing a sense of what it was like to live, race and win (or crash trying) during a period of great social change.