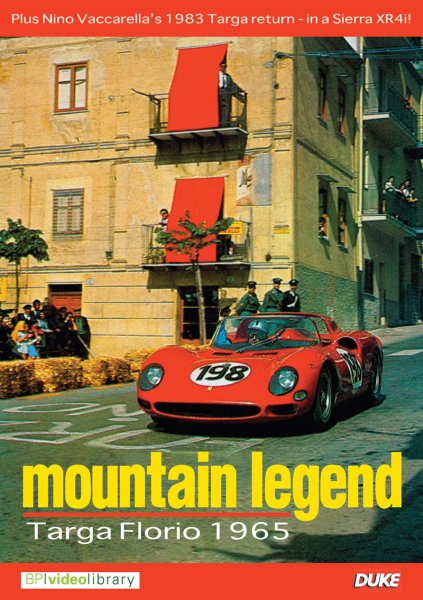 Beschreibung
Beschreibung
BP Video Library This is the gripping, action-packed story of one of the most memorable... mehr
Menü schließen
Mountain Legend #2# Targa Florio 1965

This is the gripping, action-packed story of one of the most memorable Targa Florio races of all time, with spectacular colour footage, interviews with the stars and incredible in-car sequences which will have you on the edge of your seat.

The much-missed Targa Florio was one of the greatest motorsport events of all time, and certainly one of the most demanding - at its peak it featured 10 laps of a 45-mile circuit of public roads, and almost 300 corners!

The 1965 race was an all-time classic, and the action and atmosphere is captured here in archive footage from the BP Video Library.

The world-famous event attracted the most famous sportscar manufacturers, including Ferrari, Porsche, Ford, Alfa Romeo, Healey, Abarth and MG, and the most celebrated drivers from across Grand Prix, rally and endurance racing, with names like Graham hill, Timo Makinen, Paddy Hopkirk, Jo Bonnier, Lorenzo Bandini and Rauno Aaltonen signing on to tackle the tortuous mountain circuit beneath a blistering Sicilian sun.

The film shows the race build-up, the practice and the dramatic action of the race itself. Mounthwatering sequences of classic racing cars being pushed to the limit on narrow, dusty mountain roads are accompanied by roaring engines - especially the Big Banger prototypes - and fascinating commentary.

This colourful and nostalgic record of the 49th Targa echoes with the sounds of the classic sports prototypes of the day - Ferrari P2s and 275 LMs, GT40s, Porsche 904s, TZ Alfa Romeos - and captures forever the spirit of a bygone age in the history of motorsport.

We are also treated to the view enjoyed by the drivers, courtesy of rally maestro Makinen - a thrilling way to see the Targa Florio.

Despite the star names, the 1965 Targa Florio was about local schoolteacher Nino Vaccarella, who became a Sicilian legend with three victories on his home event.

In 1983 he returned to the course, and our bonus feature, from the archives of Ford, shows Vaccarella revisiting the Targa Florio in a road-going Sierra XR4i. He recounts his memories if the great race, along with other key figures from Targa history, and shows that, despite the passage of time, he has lost none of his passion for sliding the back-end of a high performance car around the twisting Sicialin mountain roads.