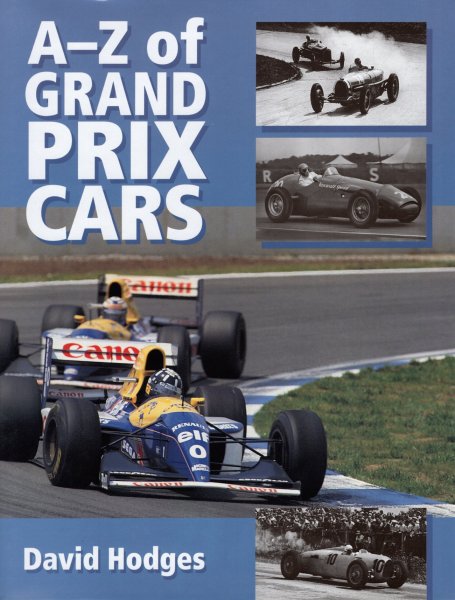 At the beginning of the twenty-first century, Grand Prix racing is fast approaching its own centenary, for the first official Grand Prix was held in France in 1906.

This book is the first reference to every car ever designed to compete in Grands Prix from 1906 to 2000. It is totally comprehensive, for it covers cars that were built to the many and various Grand Prix regulations that applied up to 1939, all those used in Formula 1 since 1947 and in the World Championship series from 1950, along with all those 2-litre Formula 2 cars that competed in official 'World Championship' races in 1952 and 1953.

All marques are covered, from famous Grand Prix giants like Ferrari, McLaren, Lotus, Alfa Romeo and Mercedes-Benz, to the everhopeful one-car constructors whose ambitions far outstripped their resources. To embrace all possible variations, the A-Z also surveys the cars that ran in the pre-World War One American Grand Prize events, the smaller-engined Coupe de l'Auto cars that were eligible for the overall classification of the 1912 French Grand Prix, and the many cars that have been built to Grand Prix regulations but did not actually start in GPs-marques including the Cosworth, DAMS, Trossi and Walker machines. Finally, those post-1947 F1 cars that only competed in non-World Championship and national races in Britain, Europe and South Africa have also been described.

Within each marque's entry the cars are described in chronological order, where possible with their type number and power outputs given. The text details influences, financing, strategies, designers, mechanical features and the cars' racing careers. In addition, many of the drivers associated with the cars are profiled. To relate today's 18,000 rpm F1 cars to the massive machinery of the early days, to the delicate 1.5-litre and 2-litre machines of the 1920s, and to the ground-trembling Mercedes-Benz and Auto Union cars of the 1930s, there is also a summary of the regulations that applied in every period.

Because of the information and insight this A-Z brings to Grand Prix racing, it is an invaluable reference that no motor-racing enthusiast will want to be without.