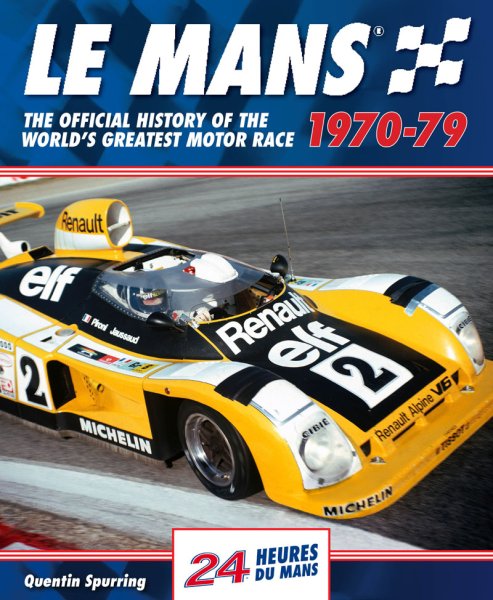 Beschreibung
Beschreibung
by Quentin Spurring Then as now, about a quarter of a million people watched the Le Mans... mehr
Menü schließen
Le Mans 24 Hours · 1970-79 #2# The official history of the world's greatest motor race

Then as now, about a quarter of a million people watched the Le Mans 24 Hours almost every June between 1970 and 1979, a fifth and sometimes more of them from Britain. This was remarkable in itself.

Global economic uncertainty, petrol shortages, unstable racing regulations - all these made it a challenging decade for the promoters of big sportscar races. To maintain its event as one of the world's exceptional sporting occasions, the ACO took it out of the FIA World Championship. It was that strong, and remained a wonderful annual spectacle. For the participants, it was, and still is, a challenge of immense intellectual complexity, in which victory could deliver real rewards for motor manufacturers in terms not only of publicity but also advances in technology and engineering techniques. This was a decade in which the ACO's efforts to encourage fuel efficiency gained in relevance and importance.

The decade began with the first Le Mans victories by Porsche, whose awesome 917 racing car, capable of more than 240mph, established a distance record that would stand for almost four decades. One of a hat-trick of wins by Matra, effectively the French national team, was achieved in a famously frantic, head-to-head duel with Ferrari. In 1975, the oil crisis led the ACO to run its race to a "fuel formula", and it was won by the Ford-supported Gulf-Mirage team.

Porsche, using motorsport to develop its turbocharging technology, won again in 1976 and in 1977, when Jacky Ickx produced one of the greatest drives ever seen in motor racing anywhere. A massive effort by Renault, again with a turbocharged engine, delivered success in 1978. The decade closed, as it had started, with a soaking wet race that was won by Porsche.

This 10-year chronicle describes events as they unfolded during each of the races, and the triumphs and tribulations experienced by the participants. The reader will learn about the ever-changing regulations that governed the races, and follow the technical advances made by innovative competitors as they strove to win the biggest prize in motor racing. The results and statistics have been compiled from fresh research, and are accompanied by more than 370 outstanding photographs, many of them published here for the first time.