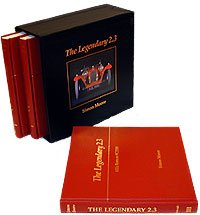 This new edition released in 2008 chronicles the colorful individual histories of almost all of the 188 cars produced in the 8C2300 series.

This book has something for all car enthusiasts: racing fans, admirers of coachwork design, history buffs. The book will also be of special interest to Ferrari enthusiasts, since it recounts the transition of Scuderia Ferrari from a small team sponsored by a few wealthy amateur drivers until it became the de facto Alfa Romeo works racing team. The racing history of each of the Scuderia Ferrari 8C2300 cars is reviewed in detail.

Each chapter recounts the exciting "lifetime" of a particular car, where known, from the factory to the present day. Since most of these cars began their lives as sports racing cars, their early racing exploits are prominently featured.

These stories are profusely illustrated with hundreds of photographs contributed by enthusiasts and professional photographers from all over the world. We believe that at least three quarters of these photographs have never been previously published. The photos capture the 8C cars at many junctures during their exciting lives: as front-line race cars in the early 1930s, as forgotten relics after the War, as restored "classics" and as today's ultimate historic racing car. Several photos document the intriguing "as found" condition of newly-unearthed 8Cs before their restorations were begun. Others document important coachwork which has subsequently been removed. Many of the cars have been re-bodied over the years, and Simon has included photographs, wherever possible, of 1930s/1940s rebodies, as well as the original coachwork.

The book also contains a chapter on the technical specifications of the 8C2300, including exploded parts diagrams from the original factory parts catalogue. Another chapter, co-authored by Simon's friend Julian Majzub, reviews the fascinating history of the Triumph Dolomite, which was a thinly-veiled copy of the 8C2300. In fact, this chapter is the most comprehensive review of the Dolomite found anywhere! In a chapter entitled "Remaining Mysteries", Simon recounts rumors and anecdotal information about many missing 8C cars, including photos of many which cannot be identified by chassis number. If you want to find a missing 8C, this is the place to start!

The book contains an extensive Bibliography, a 21-page index and five detailed Appendices: