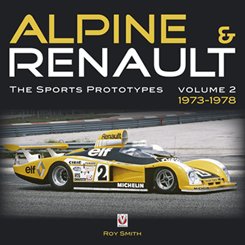 Beschreibung
Beschreibung
by Roy Smith Sports prototype racing is about endurance - for the drivers, for the teams,... mehr
Menü schließen
Alpine & Renault · The Sports Prototypes #2# Volume 2: 1973-1978

Sports prototype racing is about endurance - for the drivers, for the teams, and for the companies involved. Under the new management at Renault, and with assistance from Elf, the state-owned French oil company, Alpine made a remarkable return to sports car racing, vividly described here along with the reputations that were won and lost.

Alpine won the European sports car championship and developed a new car, an innovatory vehicle that used a new engine. Not only that, it developed a turbocharged unit to try to win at Le Mans. We see the passion and dedication for racing over a long period, with stunningly fast slippery aerodynamic designs that allowed them to take many pole positions and fastest laps. We see ultimately the new management and a new name, Renault Sport, that still survives today, and the trials and tribulations of trying to develop a V6 turbo engine. We see great engineering and huge, even comical disasters. Despair, frustration and ultimately joy are all part of the effort to eventually take the greatest prize in sports car racing - winning the Le Mans 24 hours.