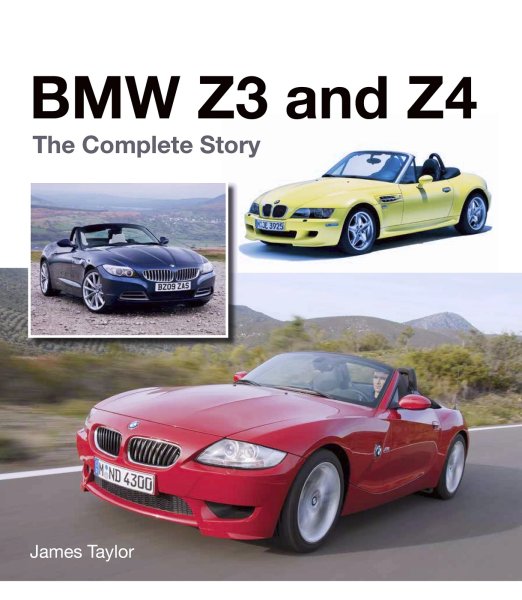 Beschreibung
Beschreibung
by James Taylor BMW, that most performance-oriented of car companies, had no affordable... mehr
Menü schließen
BMW Z3 and Z4 #2# The Complete Story

BMW, that most performance-oriented of car companies, had no affordable sports roadster in its line-up before 1995. Stung into action by Mazda's revival of the classic two-seat roadster, the German company quickly staked its claim with the Z3, a classic long-nose, short-tail design that used existing BMW mechanical hardware to good effect.

The Z3 broke new ground for BMW not only by taking the company into another sector of the car market, but also by being built outside Germany, in a new factory specially established in the USA, where most roadster sales were expected to be made.

There was never any doubt that the Z3 would be a success, and BMW quickly capitalized on it by adding an ultra-high-performance M derivative to the range and delivering a controversial coupe alongside the roadster. However, as new rivals began to appear, the Z3's fiaws became more obvious. So BMW planned its replacement as a major step forward.

The new roadster duly appeared as a 2003 model, and with a new name. The Z4 was indeed a big step forward, although its new technology was not universally appreciated, and its new styling was certainly controversial. Yet BMW enthusiasts, on the whole, loved it as a clear statement of what BMW believed a roadster should be about. Once again, the car was built in the USA, and once again the roadster version was followed by both coupe and M derivatives. This time, though, sales were not as strong as they had been for the Z3: the competition was hotting up.

So there was more new technology for the third-generation roadsters, again called Z4s but now built in Germany. They came with a retractable hardtop, so that every car was both roadster and coupe, and there was no need to build two distinct models. They brought more space in the cabin, too, but they did not bring more sales, which have slowed down since 2010. Yet this Z4 is another fine car with strong appeal to BMW devotees and it flies the flag for BMW in a market where the company now has to be represented.

This book tells the story of all three generations of BMW's "affordable roadsters", looking at the technology, the highs and the lows, and concluding that - as BMW enthusiasts already know - the two-seat BMW is here to stay.