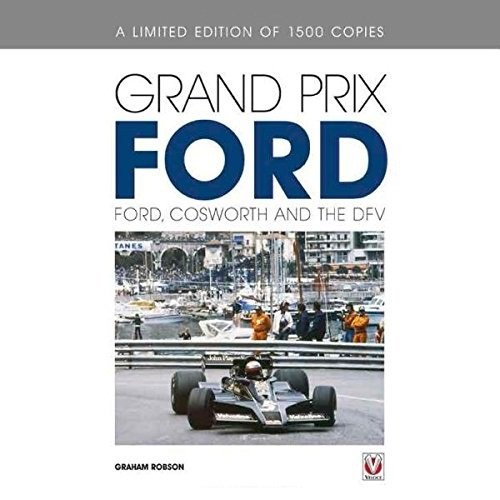 Beschreibung
Beschreibung
by Graham Robson This book is based on a concept by Anthony Pritchard shortly before his... mehr
Menü schließen
Grand Prix Ford — Ford, Cosworth and the DFV

This book is based on a concept by Anthony Pritchard shortly before his death in 2013. Graham Robson has written a detailed and superbly illustrated account of the Formula 1 cars powered by the Ford DFV V8 engine. This all-conquering power unit was the result of discussions between Colin Chapman, boss of the Lotus car company, and the UK Ford Motor Company. Design, development and manufacture was entrusted to the Cosworth company in Northampton, in response to Lotus' desperate need for an engine for the 3000cc Formula 1 regulations that came into force for 1966. Lotus had exclusive use of the DFV in 1967, its first season, when Jim Clark drove the DFV-powered Lotus 49 to four World Championship victories.

Becoming available to other Formula 1 teams in 1968, adopters included McLaren and Matra. Graham Hill won the Drivers' Championship with DFV-powered Lotus cars in 1968, and drivers of DFV-powered cars won the Championship in 13 out of 16 years. Year by year, the power of the DFV engine increased; new companies were set up to overhaul the DFV; and engines prepared by these companies were more powerful than those emanating from the factory.

Robson's narrative starts with a look at Ford's strategy of entering F1, a description of the design and development of this engine, and details the successes - and failures - of every Formula 1 car powered by the DFV engine. During these years the only manufacturer to successfully challenge DFV power was Ferrari, with drivers Lauda and Scheckter winning the Drivers' Championship on three occasions. Because the DFV later gave rise to successful derivatives, such as the turbocharged DFX, and the DFY, DFZ and DFR evolutions, these are also analysed.