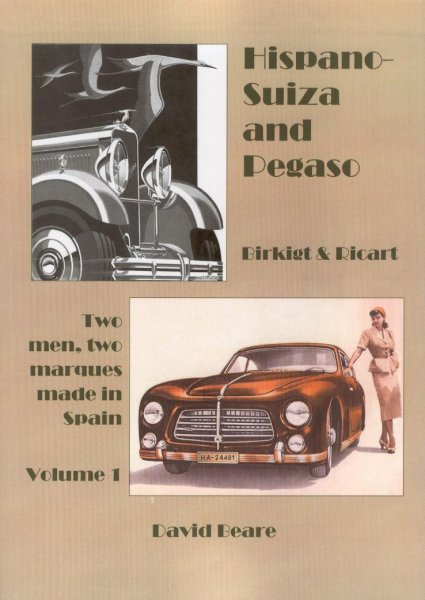 This book was inspired by two men: Marc Birkigt and Wifredo Ricart. Both these engineers achieved greatness in automobile design and production in Spain. The names of their cars are renowned the world over; Hispano-Suiza and Pegaso. The Spanish Hispano-Suiza company laid the foundations of an automobile and aeronautical engineering empire in France, Hispano-Suiza S.A. at Bois-Colombes, which survives to this day as part of a national aerospace group.

Birkigt (1878-1953) was born in Geneva and made his life in Barcelona and Paris, creating the legendary Hispano-Suiza companies which, during two World Wars, substantially helped defeat Germany. Ricart (1897-1974) was born in Barcelona and worked there until 1936, when he left for Italy to take a post with Alfa Romeo, principally as a racing and aircraft engine designer. He returned to Barcelona in 1945 and founded the state-owned Pegaso truck company, then moved to Madrid and in 1951 astonished Europe's car makers by introducing a highly-advanced sports car, the Pegaso Z102.

This book is part one of the story, told from a Spanish viewpoint, of two talented engineers who radically changed the established concepts of high-performance cars, aero-engines, armaments, trucks and buses. Many were designed and made in Spain, despite the almost complete absence of a national motor industry and extremely difficult political and economic conditions current there until the 1960s. It is a story of extraordinary skills, persistence, iron will and the taking of opportunities. It is also a story of optimism, financial acumen and sheer good luck.