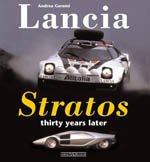 Beschreibung
Beschreibung
by Andrea Curami The Stratos prototype made its debut in 1970 at the Bertone stand of the... mehr
Menü schließen
Lancia Stratos #2# thirty years later

The Stratos prototype made its debut in 1970 at the Bertone stand of the Turin Motor Show. It immediately raised curiosity and surprise among the visitors, but a half-hearted interest by the Lancia company. One year later, the new Lancia Stratos was finally produced to comply with the needs of the Lancia Racing Team. The car was completely different, although having the same glamour and appeal, it turned out to be perfect to compete in rallies. For 6 consecutive years it became the car to defeat, winning three World Championships (1974, 1975 and 1976).

This book shows the history, the evolution, the competitions as well as the drivers profiles.