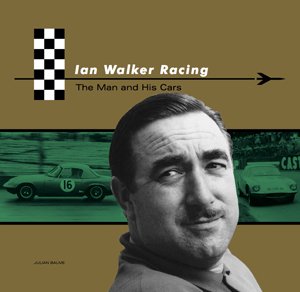 Beschreibung
Beschreibung
by Julian Balme This book explores the life and times of Ian Walker. "Walker The Talker"... mehr
Menü schließen
Ian Walker Racing #2# The Man and His Cars

This book explores the life and times of Ian Walker. "Walker The Talker" as he was frequently referred to, was an astute businessman whose life offered many challenges. Ian Walker and Ian Walker Racing were prominent names in motor racing in the 1960's alongside that of Colin Chapman and Lotus, with whom he enjoyed a great friendship. Ian Walker embraced almost all forms of post-war motorsport, from rallying to racing, from driver to team manager, from car manufacturer to car dealer, all achieved in just ten years.

His exceptionally high standards of preparation and presentation saw Ian Walker Racing universally recognised as the Lotus "B team". Consequently he would provide drives for three future world champions, Jim Clark, Graham Hill and Sir Jackie Stewart, along with a host of other talented drivers including Mike Spence and Paul Hawkins.

This exhaustive book looks chronologically at Ian Walkers life, the cars he built and raced, and the people that were part of his great adventure during the heady period of the 60's, a time that began the transformation of motor racing into the business it has since become. Each and every copy is supplied in a deluxe cloth covered slipcase and contains 400 images, many from the Walker family archive.