In 1963 the Mercedes W113 replaced two cars: the 300 SL racing legend and the successful 190 SL. In the process, the 230/250/280 SL two-seat coupé/roadster became an icon not only by carving out the perfect niche between its two predecessors, but also by being like no other car on the road.

This book explores both the technical and social side of how this legend was born. Even when the competition was quicker or less expensive, there was an extra element to these SLs that made them the more appealing choice. The 230 SL introduced crisp German styling and French flair, but it was its distinctive Japanese pagoda-like roof that gave the car its nickname. The 250 SL bucked the 1960s trend of adding horsepower, instead showing the versatility of extra torque, while the 280 SL offered a new 2.8 litre engine.

Mercedes-Benz had a long history of offering fast cars as well as luxurious ones, but the W113 was the first to combine both of these in a platform that excited all levels of drivers. This was reflected in advertisements that featured everyone from Sir Stirling Moss to the first sales material targeting women. All "Pagoda" SLs offered an engine size that kept it a sensible choice for Europe, but its build quality still made it appealing for the American luxury scene.

With production histories and comprehensive specification details, this book charts the full story of the Mercedes W113, and why the "Pagoda" was the SL that set the standard that we expect from Mercedes today. 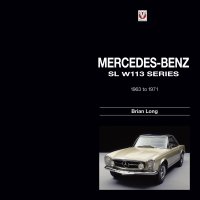