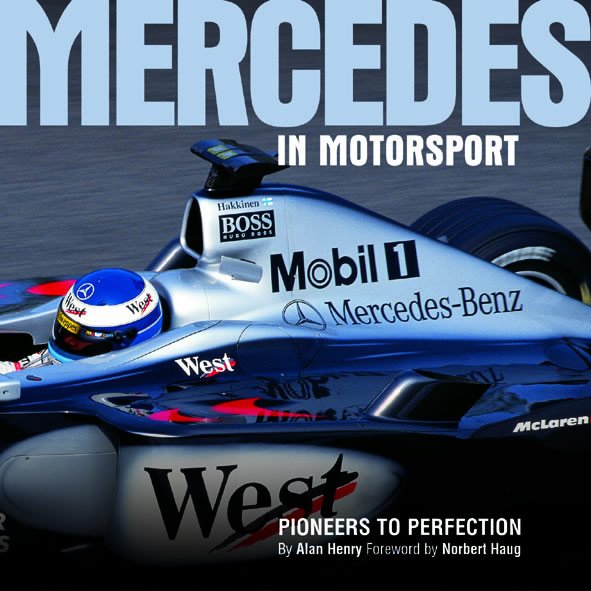 Beschreibung
Beschreibung
by Alan Henry Mercedes-Benz is a name which stirs evocative images of more than a century... mehr
Menü schließen
Mercedes in Motorsport — Pioneers to Perfection

Mercedes-Benz is a name which stirs evocative images of more than a century of motorsport achievement, from the pioneering days of racing when every event was a dangerous adventure through to the highly professional, televised world of today's Grands Prix.

This book charts the development of the Mercedes name as a byword for engineering excellence in successive eras of the sport, a heritage which can trace its roots back to 1894 when the primitive Daimler V2 engine won the world's first motor race, through to the Formula 1 World Championship double achieved by Mika Hakkinen at the wheel of a McLaren-Mercedes in 1998 and 1999, and beyond, through the maiden season of the new millennium.

The book - packed with historic photographs - charts in great detail the legendary days of the 'Silver Arrows', from 1934 to 1939 when Mercedes was locked in battle with rivals Auto Union for domination of the European Grand Prix stage. There are fascinating insights into the company's recovery from the ravages of war and its epic victories in the 1953 Carrera Panamericana and the 1955 Mille Miglia. The dazzling 1955 F1 team of Juan Manuel Fangio and Stirling Moss saw the great Argentine driver winning the World Championship in a Mercedes-Benz W196. Then, after adopting a low-key approach to motorsport for three decades, Mercedes re-emerged in partnership with Sauber as international contenders on the sports car racing scene during the mid-1980s, a campaign that built the foundations for its return to Formula 1 in 1995 with McLaren.

Written by top motor racing journalist Alan Henry, who is weil connected with the senior racing management at both McLaren and Mercedes-Benz, this volume not only provides a factual account of the Mercedes motorsport story but is also spiced with fascinating anecdotes and recollections from many personalities who over the years have played key roles in the competition programme of the famous Three-Pointed Star.