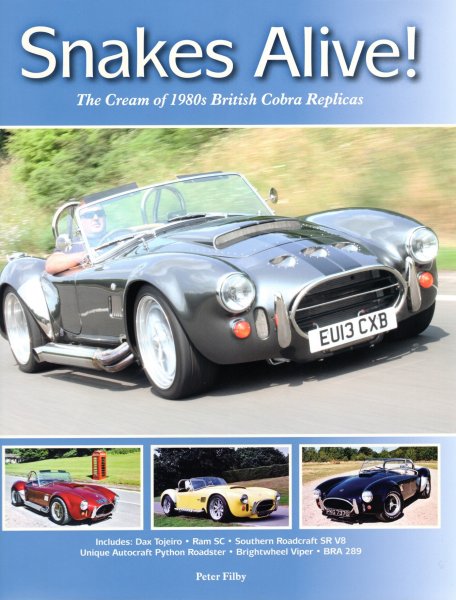 In writing and publishing this amazingly detailed book about the wonderful breed of AC Cobra replicas so popular in the UK since the early 1980s, Peter Filby has filled a huge gap in the history of British specialist sports cars. The cars, so many of them lovingly hand-built and superbly finished, truly deserved the limelight, deserved to be celebrated. Models like the Dax, Python, Ram SC, SR V8, Viper and BRA 289 needed to be written about, needed to be placed in the annals of automotive history.

The AC Cobra (later the Shelby Cobra) is surely the most replicated car of all time. Not surprisingly, really, because in its day it was one of the most spine-tingling, brutal machines available, the fastest, most thunderous road car on the planet. It looked achingly impressive, too, with its eminently serious front end, bulging wheel arches, wide wheels and wicked side exhausts.

Probably as many as 100,000 Cobra replicas have been hand-built in the USA since the 1970s. The figure in Britain is much lower although the market has been thriving for many years. The first UK company to offer a fully ready-for-market body/chassis kit was Beribo Replica Automobiles (BRA) of Doncaster, South Yorkshire. Known as the BRA 289, the kit was developed during the late 1970s and first advertised early in 1981. As a market-ready product, it was certainly well ahead of the next in line, the 427-shaped Dax and Unique Autocraft Python fake snakes.

The amazing cars covered in this book represent the very best of the breed that started life in the early 1980s. Apart from covering their histories in depth, Peter Filby has also created a pictorial celebration of prestige Cobra replicas. If you're passionate about arguably the most ferocious and outrageous of all sports cars, this book makes essential reading.