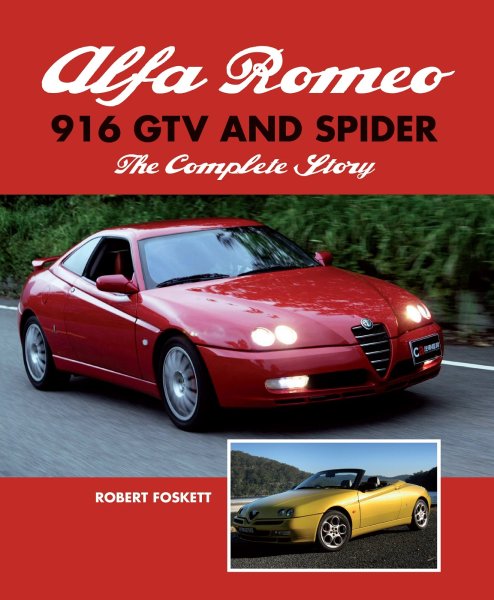 This book traces the complete story of the Alfa Romeo GTV and Spider models produced between 1994 and 2005, commonly known to enthusiasts by the manufacturer's project code as the 916 series. The 916 models would always be controversial - they replaced the iconic Spider, the best-selling Alfa Romeo sports model of all time, and the brand-establishing Alfetta GTV. Sharing components and a platform with a humble Fiat hatchback, would the cars ever be considered "real" Alfa Romeos?

The company worked hard to ensure that these accessibly priced, sporty cars were fit to represent the marque. The cars were designed by Pininfarina and powered by a range of innovative engines. Continuing Alfa Romeo's reputation for engineering excellence, the range included intelligently designed four-cylinder motors and powerful six-cylinder motors. One of these, the JTS, was the world's first direct petrol injection production road car engine.

The cars were critically acclaimed and, though they faced tough competition in the late 1990s from the likes of the Audi TT, they remained in production for over a decade. Never designed for frontline motorsport, the GTV saw racetrack success in the Alfa Romeo GTV Cup race series of 1999-2000, the series being celebrated by the exclusive GTV Cup Special edition. Finally, the models were retired with honour as the Brera and Brera-derived Spider assumed the role as Alfa Romeo's current sports car range in 2005 and 2006.

Comprehensively researched, this book provides a guide to the entire lifespan of the 916 series. It sets the scene with a brief history of Alfa Romeo before examining the evolutionary design process that culminated in the production cars. It includes an in-depth guide to each of the model variants produced, through all three facelifts. Complete with specification tables for all models, comprehensive production figures and a listing of chassis numbers for the limited edition GTV Cup model, the book also considers the cars' current position in the classic car market, and offers an insight into the GTV and Spider owner's experience.