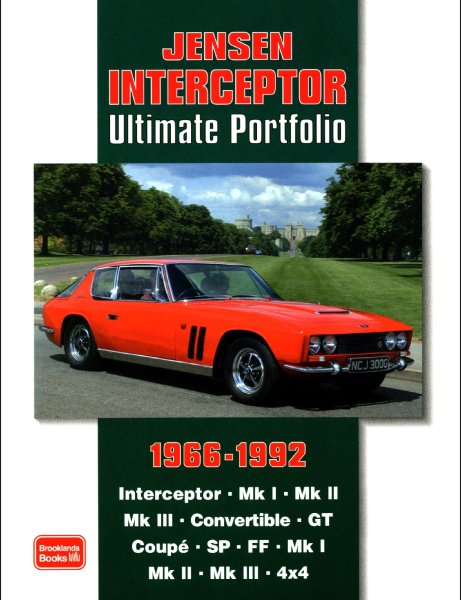 Description
Description
The Jensen marque is yet another of those bespoke English companies that produced a number of... more
Close menu
Jensen Interceptor 1966-1992 — Brooklands Ultimate Portfolio

The Jensen marque is yet another of those bespoke English companies that produced a number of excellent automobiles but was unable to adapt to the changing international industrial climate. A great pity really. After several years of producing the innovative and distinctive looking C-V8, Jensen really lifted its game with the 1966 introduction of the Interceptor. It was, the most luxurious and well-appointed car to proudly carry the Jensen name. It carried on the tradition of being powered by a big American (Chrysler) cast iron V8 engine and, for the first time, had an all-steel body designed in Italy - in the case by Touring of Milan. Initially the bodies were built by Carrozzeria Vignale and trucked to West Bromwich for final assembly but this expensive process ended with the model change from Mark I to Mark II when Jensen took over full production responsibilities. The Interceptor range comprised two models: the Interceptor and Interceptor FF. Hailed by the world's motoring media as the most technically advanced car of its time, the FF was voted Car of the Year by a panel of experts. Quite an accolade. Its combination of svelte Italian styling and V8 power in conjunction with the Ferguson Formula four-wheel drive system and Dunlop Maxaret anti-lock braking system was revolutionary stuff for 1966. Almost irresistible if you believed what the press wrote. Performance was never lacking, even from the small 6.3-litre V8- engined cars. The two-wheel drive model could run to 137 mph and do the 0-60 mph sprint in 8.1 seconds while the FF returned 131 mph and the same 8.1 seconds. Motor magazine said it was the best handling car for its size and power we have tested. Over the next decade Jensen embarked on a process of refinements that left the beautiful styling virtually untouched. Engine size increased to 7.2 litres and new versions arrived in the forms of the SP, Convertible and the Coupe. The FF had the shortest lifespan, from 1966 through 1971 during which time only 318 (this figure varies slightly depending on source) were built. Surely this must be one of the most collectable cars ever made in England? Ownership changes of the company after it departed the British automotive scene in 1976 saw an attempt at reviving the Interceptor and at one time there was the possibility of a completely new model. But sadly it was not to be. We do, however, have the Interceptor, a true high performance Continental crusher that is today coveted by a growing number of enthusiasts around the world.