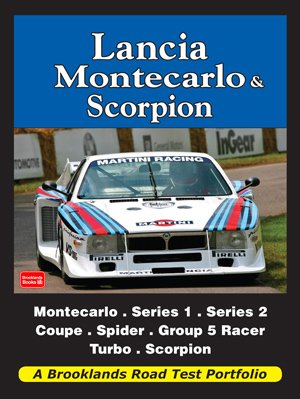 Lancia Montecarlo was launched in 1975, as a two-door, two-seater coupe, has a mid-mounted, transverse 1,995cc four-cylinder engine driving the rear wheels, basically the powertrain came from the Lancia Beta range, but somehow the performance never quite matched its sporting appearance. And, despite the theory that a mid-engined layout should provide optimum weight distribution and, therefore, much better handling, the original Montecarlo series suffered from the front brakes locking up too easily and unpredictable road holding in adverse weather conditions.

Available either as a Coupe or a Spider model with a Targa-style, manually operated convertible top, the Montecarlo had a top speed of around 120mph and a zero to 60mph time of less than 10 seconds. Because the Monte Carlo name was already being used by Chevrolet, in North America the Montecarlo was re-branded as the Lancia Scorpion. Other changes for the US market included the addition of exhaust emission control equipment and a reduction in engine size to 1,756cc in order to meet the standards required, plus different bumpers, bodywork and headlights to conform to federal crash test legislation. The effect of these alterations was less power and poorer performance, and the Scorpion only lasted two years (1976-1977) with a total of approximately 1,804 sold.

Faced by mounting criticism and disappointing sales figures, Lancia decided to suspend production of the Montecarlo model in 1978. Improvements and engineering modifications were made to cure the braking and handling woes before the second series of the Montecarlo was introduced in 1980. Sadly, despite these refinements, the Montecarlo was unable to overcome its lacklustre reputation and when Lancia finally pulled the plug in 1982, the total number built since 1975 amounted to less than 7,600 cars.

It is this rarity, together with the cars themselves being highly susceptible to rust problems (which meant that many of them were scrapped after only a few years), that has helped to increase the desirability of the Montecarlo to today's Lancia enthusiasts. It is one of those curious aspects of motoring history that occasionally happens, when a model such as this, pretty much a short-lived failure in its day, evolves into a car that is regarded worthy of being cherished and preserved.

Models reported on are the Series 1 & 2 coupes & spiders plus the successful Group 5 turbo racers. Included are road & track tests, model introductions and a detailed technical report. Advice is offered on acquiring a good used example.