When Mercedes-Benz introduced its new 124-series medium-sized saloons in 1984, the company was already hugely respected for the superb build quality and advanced engineering that had gone into their predecessors. With the 124 series, the company now picked up on a new, sleek and aerodynamic style that had been previewed first on the 126-series S-Class in 1979 and then on the 201-series "compact" saloons in 1982. It was the work of Mercedes' design chief, Bruno Sacco.

The 124 range immediately became the benchmark by which medium-sized models were judged in the late 1980s, and its qualities continued to merit respect from rivals right through until the last example was built in 1997. As always, the saloons at the core of the range focussed on engines between 2 litres and 3 litres in size, with a wide range of both petrol and diesel types. There was a model to suit every would-be buyer, from the taxi driver through the family motorist and on to those who were willing and able to pay for luxury and performance.

Just as important were the estate models, introduced around a year later but carefully designed alongside the saloons so that they did not look like conversions of the original design. The crowning glory of the original range was the stylish coupe. Intended on its 1987 launch to be the last body variant of the range, it actually went on to sire the cabriolet models that were introduced in 1991.

During the lifetime of the 124 range, performance became increasingly important to buyers of cars in its class, and Mercedes responded with enthusiasm. The four-valve engines that accompanied the range's mid-life facelift brought additional punch for the everyday models, and right at the top of the range came 4.2-litre and 5-litre V8 models. Inevitably, the 124 range also benefited in the early 1990s from the close working relationship between Mercedes-Benz and long-standing tuner AMG, which some years later would be absorbed into Mercedes as the manufacturer's high-performance division.

Today, the 124 range is appreciated not only for its design and engineering excellence but also for its longevity and its continued practicality. This book records a singular achievement in the German manufacturer's history, a testament to Mercedes' traditional school of thought, where engineering took priority over marketing requirements. 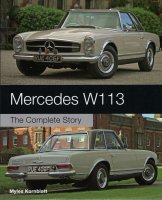