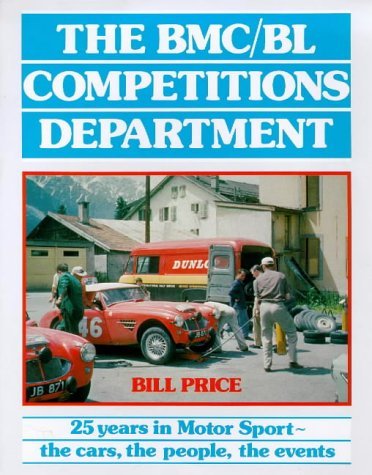 Description
Description
by Bill Price For a quarter of a century from the mid 1950s Britain's leading motor... more
Close menu
The BMC/BL Competitions Department — 25 Years in Motorsport · the Cars, the People, the Events

For a quarter of a century from the mid 1950s Britain's leading motor manufacturer - first as the British Motor Corporation, then British Leyland - was committed to motorsport, predominantly rallying, as a means of improving its product and keeping the corporate banner under the public gaze. From 1955 to 1980 enormous success was achieved by the Competitions Department under the leadership of such notable characters as Marcus Chambers, Peter Browning and Stuart Turner.

This much-loved book, re-issued to celebrate the fiftieth anniversary of the Department, includes the full story of the famous Abingdon team and its key role in British motorsport; information about the competition managers, the drivers and the mechanics and support staff; the machines - Austin, Austin-Healey, Morris and Triumph - from MG, Minor and Mini to Maxi, Marina and TR7; the events - Monte Carlo, Alpine, 1000 Lakes, Liege, Tulip; the victories, disappointments, crashes and boardroom politics; and event results for works-entered and works-supported cars from 1955 to 1980.

He records great triumphs from the heady days of the Austin-Healey 3000 and Austin A40 entries in such rallies as the Liege-Sophia-Liege, through the years of the Monte Carlo magic, and the Mini during the mid-1960s, to the BL-campaigned TR7s and TR8s of the 1970s. But inevitably there was failure, disappointment and sadness too - when injury occurred, or victory seemed assured only to be snatched back by fate, or corporate support faltered at vital moments.

The text, illustrated with a host of historic colour and mono photographs, is supported with appendices listing event by event, works-entered and works-supported cars.

Bill Price, assistant to Marcus Chambers and Stuart Turner in the BMC Competitions Department, joined the Special Tuning Department as workshop supervisor, becoming manager of Leyland ST in 1974. From 1977 to 1981 he was competitions manager.