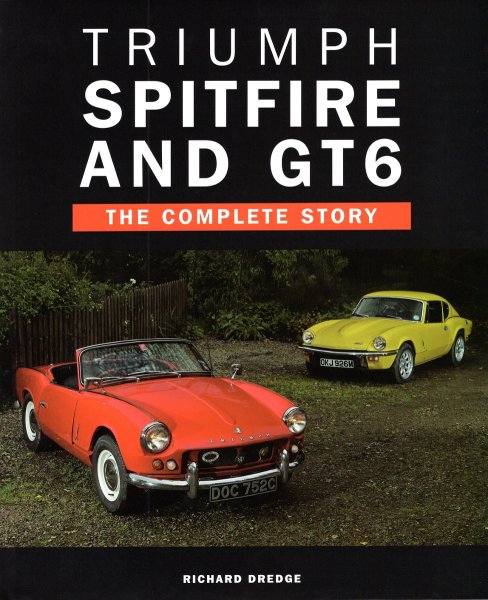 Description
Description
by Richard Dredge For a whole generation of car enthusiasts, Triumph was the manufacturer... more
Close menu
Triumph Spitfire and GT6 — The Complete Story

For a whole generation of car enthusiasts, Triumph was the manufacturer to turn to when buying a sports car. Whether it was a Spitfire or GT6 - or the more costly TR models - this Coventry manufacturer was the sports car king during the twentieth century. Now that these machines are fully fledged classics, nothing has changed. While the Spitfire has the MGB as a formidable adversary, the GT6 is still in a class of its own, this compact six-cylinder hatchback providing style and performance at an affordable price.

This book details the history and development of these classic cars, with specification guides for each of the five Spitfire derivatives and three GT6 models.

The Spitfire arrived in 1962, four years before the GT6. However, while the GT6 would be killed off as early as 1973, the Spitfire would endure for almost two decades, the final example rolling off the production lines in 1980. In those nineteen years of production, more than 300,000 Spitfires would find buyers throughout the world, the car proving especially popular in the US.

Offered in five distinct forms during its lifetime, the Spitfire started out with a 1,147cc Herald engine, before progressing to a 1,296cc unit; a 1,493cc powerplant would arrive later. The GT6 meanwhile was only ever offered with the two-litre straight- six engine taken from the contemporary Vitesse, although there are plenty of owners who have fitted the long-stroke 2.5-litre version of this powerplant in a bid to improve performance further.

This book covers how these two compact sports cars evolved, what the press thought of them and how they fared in motorsport. It examines the prototypes and design studies that didn't progress, and there is also a full guide to buying, tips on modifying, information about colour and trim options, and details of optional extras available for each model.