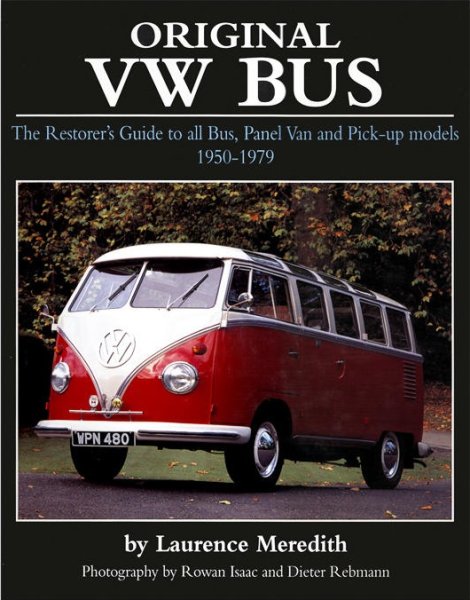 Description
Description
by Laurence Meredith There has never been a machine quite like the VW Bus. Unlike other... more
Close menu
Original VW Bus — The Restorer's Guide to all T1 & T2 Bus, Panel Van and Pick-Up models 1950-1959

There has never been a machine quite like the VW Bus. Unlike other utility vehicles, the classic VW Buses - or Transporters - have never outgrown their usefulness, hundreds of thousands of survivors remaining cherished by their owners because of their brilliant blend of practicality, character, versatility, style and dependability. All over the world early Buses are still taking people on holiday, ferrying children to school or carrying building supplies...

This book is a comprehensive guide to the specification of the Split-screens of 1950-67 and the Bay-windows of 1967-79 - the vehicles of the classic era - in the form in which they left the Volkswagen factory. Besides the familiar peoplecarrying versions, relatively scarce derivatives - such as the vans, pick-ups and double-cab pick-ups - are covered too. More than 200 specially commissioned colour photographs of over 25 different vehicles reveal the details that distinguish one model from another.

The completely authentic specification now sought by the most discerning enthusiasts causes many problems with "Splitties" and "Bays". Many of these vehicles have been altered over the years with updated and incorrect parts simply to keep them in service, enliven performance or decorate their appearance. During manufacture, too, VW made a bewildering number of specification changes to keep its super-successful product up-to-date, giving any individual vehicle numerous distinctive features according to model and period.

To provide answers to the questions VW Bus cult followers are always asking, immense effort has gone into making this book as thorough as possible. Its author pinpoints many obscure modifications as he dissects the fascinating evolution of these vehicles over nearly 30 years. Much detective work in Germany, the UK and the USA has gone into locating the right vehicles for photography, so that correct details are shown from superb specimens that have been preserved in original condition or restored with close attention to authenticity.

This book builds up an unrivalled picture of the factory specification Split-screens and Bay-windows. It will be invaluable to all enthusiasts, owners, restorers and buyers.