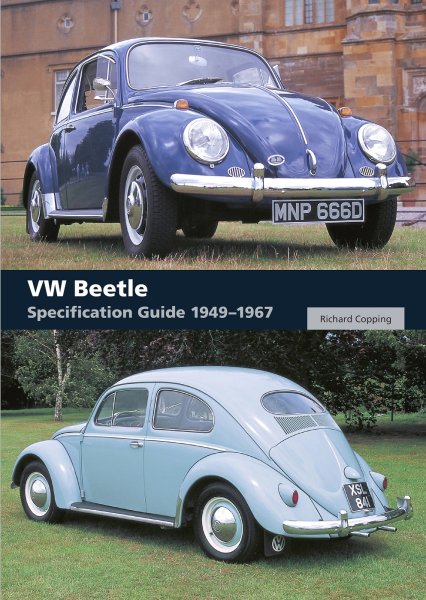 Description
Description
by Richard Copping The incredible popularity of the Volkswagen Beetle, both during and since... more
Close menu
VW Beetle — Specification Guide 1949-1967

The incredible popularity of the Volkswagen Beetle, both during and since its extremely lengthy production run, guarantees that numerous examples of its type will be cherished for many years to come.

Although many books have been written in the past covering individual aspects of the Beetle's story, no book has ever gathered together all the different strands to produce one truly comprehensive volume covering the golden age of the car's production, the years up to 1968 when the Beetle's chief mentor for the previous twenty years, Heinz Nordhoff, died.

This book begins with a summary of the fascinating story of how the Beetle came to exist, when the passion of a brilliant designer with an enduring wish to build a car for the ordinary people was bonded to Hitler's Nazi propaganda machine. The extraordinary tale of the car's survival through British improvisation is then recalled, while the determination of Heinz Nordhoff, put in charge at Wolfsburg in 1948 to create a world-class company through the Beetle, forms the backbone of the historical chapters.

Linked to the car's history, but of equal significance to those with a practical interest in the Beetle, are studies of both export markets and countries where the vehicle was either assembled from German-built kits or manufactured from scratch. In a similar vein, both the soft-top versions of the Beetle and low-production-
run vehicles manufactured by specialist coachbuilders using its chassis are analysed.

Key, however, to this book's make-up, and what really makes it unique, is the year-by-year, month-by-month summary of Beetle production changes, including the all-important chassis numbers. As an accompaniment, each Beetle engine offered over the years is described, every paint and trim option is covered, while many a popular and sought-after authentic period accessory is illustrated. Amine of information for the restorer and enthusiast, every Beetle lover and owner of a pre-1968 car will need this book in his or her collection.