Description
Description
by Paul Parker The road circuits and race tracks of Europe and the Americas provide the... more
Close menu
Formula 1 in Camera 1950-59

The road circuits and race tracks of Europe and the Americas provide the perfect backdrop for this wonderful selection of photographs chosen to portray the beauty and heroism of Formula 1 motor racing in the 1950s.

Motor racing in that decade was very dangerous, often fatal and almost entirely at the mercy of fate, where actions did have consequences. Yet it was also a magnificent endeavour, full of unattainable glamour, mystique and derring-do, played out by a cast of some of the most charismatic cars and drivers ever seen. Farina, Fangio, Ascari, Hawthorn and Brabham achieved the ultimate prize and became World Champions, but the greats also included Gonzalez, Moss, Brooks, Collins, Behra, Trintignant, Villoresi, Taruffi, Castellotti, Musso, Schell, Lewis-Evans and so many more.

Formula 1 in the 1950s was also a fascinating tale of the transition from the front-engined layout and wire-wheeled aesthetics of the typical grand prix car to the gradual takeover of the rear-engined philosophy; an evolution that was all but complete by the end of the decade.

As for national rivalries, Italian domination by Alfa Romeo and Ferrari lasted for the first four years, followed by two seasons of Mercedes-Benz might, and then Ferrari and Maserati were to the fore for a couple of years. By this time, however, a serious challenge to the status quo had arrived in the shape of Tony Vandervell's Vanwall, which finally proved that a British car could beat the best, the earlier efforts of BRM, Connaught, HWM and others having faltered. And then, as the decade drew to a close, Cooper came along and rewrote the engineering of single-seater racing cars forever by powering Jack Brabham to the World Championship in 1959.

In presenting outstanding photos accompanied by an engaging and insightful commentary, this book captures the atmosphere and action of Formula 1 in its first decade. 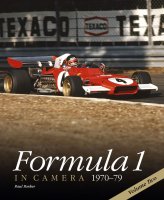 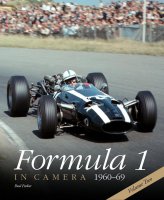 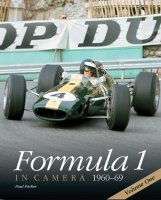 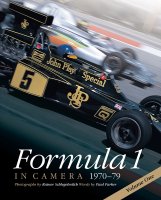